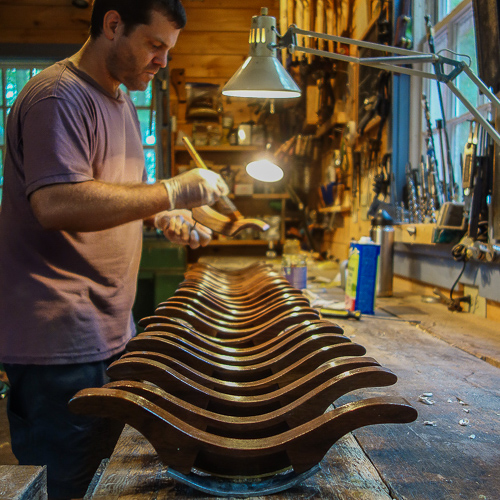 Elia recently invited me to contribute to his blog. By way of introduction, I’ve been working with Elia since 2017—primarily as resident toolmaker. Prior to that I had a career as a baker and pastry chef, but my shift to woodworking had earlier inklings. After college I apprenticed some with my father, a woodworker of nearly 50 years who has split his time between Windsor chairs and small wooden boats. And back in 2008 I traded work time for instruction from Elia as I built a fanback side chair for my daughter and later assisted his first class at The Woodwright’s School.

My time at Hand Tool Woodworking has been rewarding on several levels. While I have been able to make a handful of chairs, get plenty of practice riving, build a post and beam shed, lay a brick patio, help Elia teach at Penland School of Craft and present at Colonial Williamsburg, and even hone my cooking skills by making lunches for chair class participants, the vast majority of my time has been spent making tools. On any given day I’m most likely performing the same small step on each tool over and over and over again. 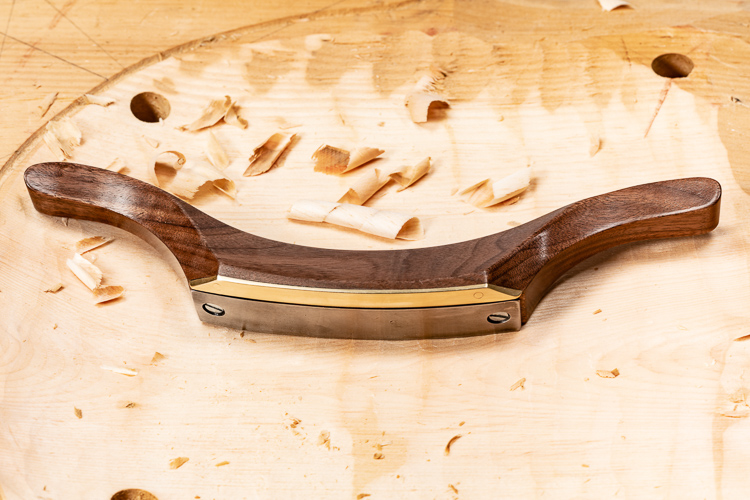 The tool work began early in my time at HTW. Elia had been selling three tools—travishers, tenon cutters, and reamers—off and on for years, but he had trouble keeping up with demand. Taking me on served as a catalyst for improving this facet of the business. Together we’ve refined the design, and more significantly, the manufacturing process of each of these tools. I’ve taken over production of the travishers and tenon cutters while Elia continues to make the reamers. In all three cases, our improvements have proven comprehensive—rendering our tools more accurate, more attractive, and also more available (i.e., we make them faster).

I tend to work in batches of 50, alternating between travishers and tenon cutters. While some may call this high production, it still feels like a human-sized quantity to me. It makes me think of the “small batch” description seen on many artisan food products—the implicit message being “we won’t let quantity trump quality.” Making 50 tools at a time is not the same as making one at a time, however, and some of the advances we’ve made do involve noisy and messy power tools like routing the depth cut on the brass soles of the travishers or smoothing the tenon cutters with a belt sander. But there are many steps on each tool that I must still do by hand and that’s often while seated quietly at a workbench, listening to a podcast, while I immerse myself in becoming an assembly line of one. 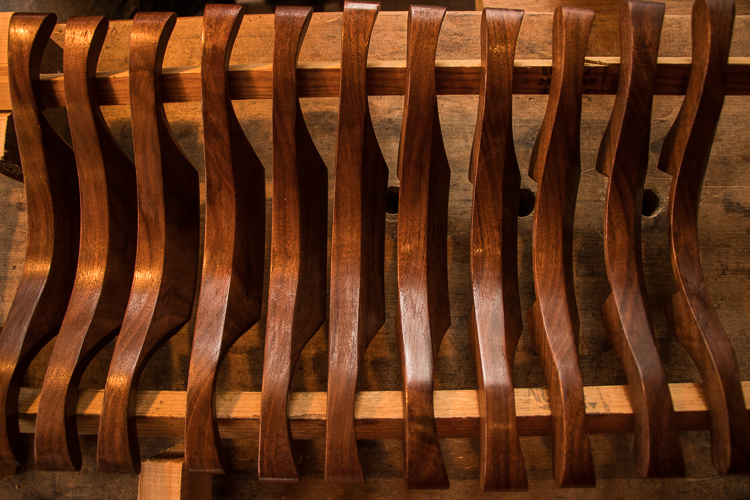 Repetition can be monotonous, but I have not found that to be true with my tool work, and I’ve been giving some thought as to why. First, I enjoy the rhythm of doing a skilled task over and over. There’s a meditative aspect to allowing part of my brain focus on doing a familiar task while allowing another part to wander in thought or focus on an engaging interview or discussion on my headphones. Second, I’ve realized over the course of many batches of tools that the repetition improves my skill and speed at each step. My hands seem to remember the mistakes I’ve made and adjust to avoid those while also moving faster through the steps learned by rote. Turning the handles of the tenon cutters on the lathe is smoother and more consistent with each batch. The same is true for chiseling out the throat of each travisher. 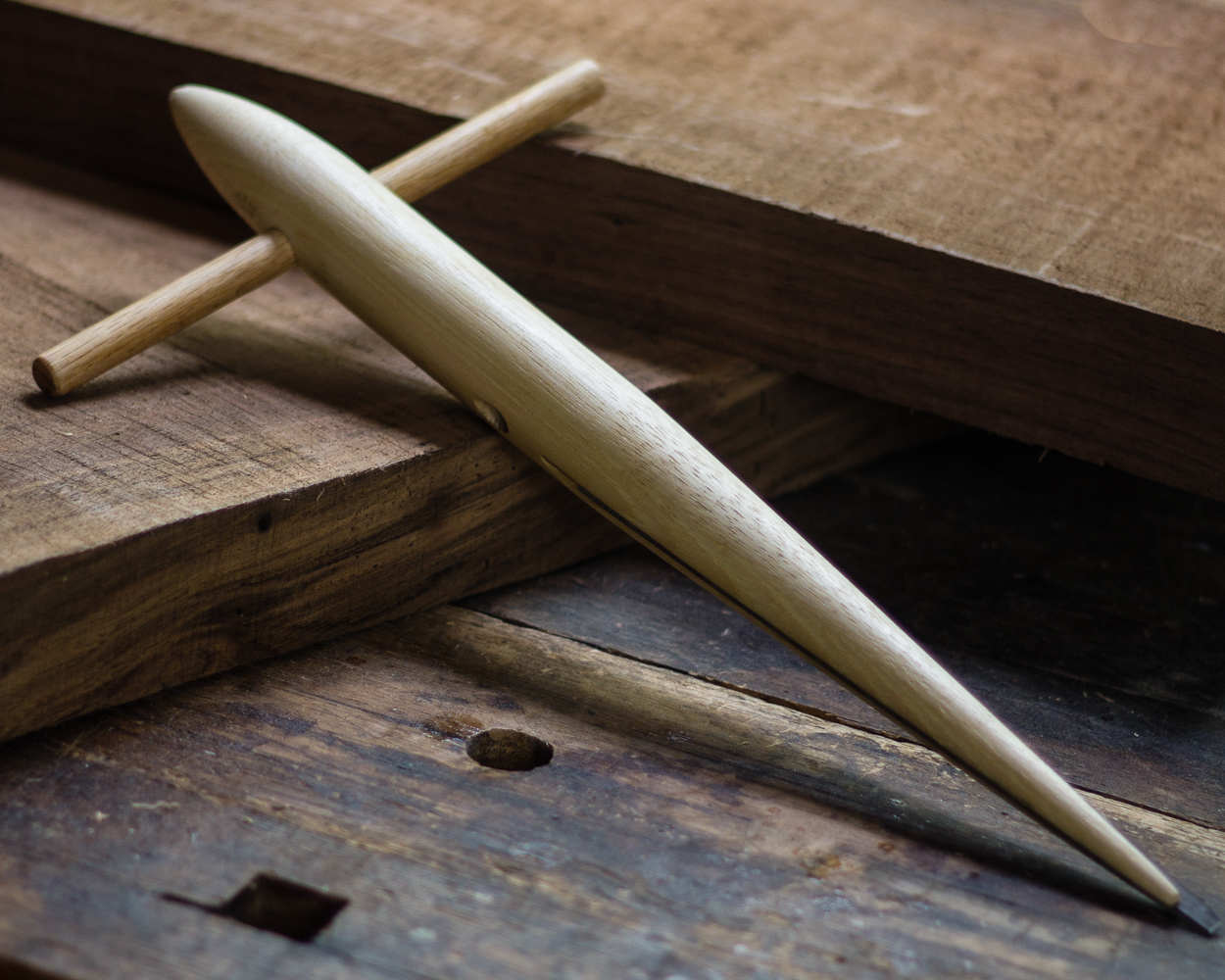 Another phenomenon I’ve noticed in this work is what I’ll call the “big picture.” Making the same cut or installing the same insert 50 times is not the same as doing that all day long. The batch sizes I work with allow me not only to see the big picture of where I’m headed in terms of completing the whole set of tools—shellacked, waxed, and ready for sale—but also allows me to think about the even bigger picture of how to make a better tool and how to make the”making” better, too. It seems there’s no end to tweaking something here or there to either speed up the process without sacrificing quality craftsmanship or to make the tool stronger, prettier, or more effective. And I think this is the crux of the reward of this repetition. It’s where creativity enters. It’s also, paradoxically, what makes each new round not strictly a repetition, but an evolution toward a better tool and a more fulfilled maker.

We’ve bumped up tool production in the past few months in anticipation of making our first appearance at the HandWorks expo in Iowa that was scheduled for Labor Day weekend. Unfortunately, we’ve just learned the gathering has been postponed to 2021 due to Coronavirus concerns. On the upside, we should have plenty of all three tools in stock for the foreseeable future—making this the perfect time to fill out your collection! 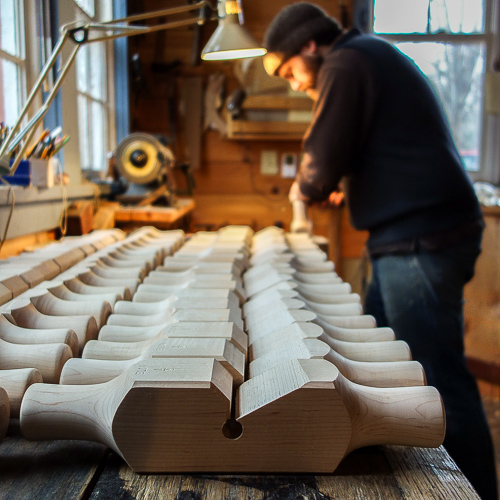 Thanks for the musing, Seth. The Windsor chair making class that I took there was one of the best craft classes I’ve ever attended, and that includes quite a few. After reading your post, I’m almost sorry that I already purchased all three tools when I was there — perhaps you and Elia need to think about adding some more tools to the catalog! I do have to tell you, the travisher is still the most beautiful tool in my workshop, and it’s a joy to use. This is what makes hand tool woodwork so satisfying.
Thanks for all the work and thought that you and Elia put into making your HTW tools.

Thank you for this post. There is also a wonderful article of the same topic in Mortise and Tennon magazine (issue 4 I think). It’s an awesome magazine and well worth subscribing to. I am in the process of making an advent calendar box of drawers for my wife. It needs 60 housing dados. Like you, I have had some similar learnings in making all these dados.

Seth,
Great post. This is the accomplished feeling we receive in working wood with hand tools. Each piece of wood is different and no two results are the same.
I just ordered one of your travishers and looking forward to seeing the results that it will bring.
Keep it going. Hope to see you in Iowa in 2021.