A Day in Dave’s Shop 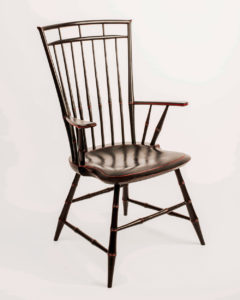 On my way home from a holiday visit to my future in-laws in KY, I delivered Michelle her new arm chair.  Here’s a story about her chair:

As I whittled spindles for a Birdcage Arm Chair, I thought back on the day I first made spindles for the man who taught my mentor, Curtis Buchanan, to build chairs.

On my first morning working in Dave Sawyer’s shop, he asked me to shave some spindles for him. Without saying a word, he sat down at his old rickety shave horse and whittled a spindle to show me how.

At age 24 , I’d made a few spindles in my time, and figured I knew what there was to be known. But I asked a few questions and then it was my turn. I whittled a spindle and handed it to him.

Slowly he looked it over, measuring it here and there. “It’s a little small here, maybe a 32nd,” he said. “I don’t think it will work.” Dave went to school at MIT and worked for a firm that made machines that made gears for transmission, before becoming a full-time chairmaker in the late ‘70’s.

“Ok, I’ll whittle another one.” and so I did. It met the same fate, so I started on my third.

“I’ll take my time whittling this one,” I said somewhat sheepishly.

“I ‘shave’ my spindles, ‘whittling’ sounds awful rough to me.” said Dave gently. He liked dictionaries.

“Oh! I learned from Curtis and he ‘whittles’ them,” I answered with a laugh.

Dave Sawyer worked with a machine-age mentality of precision, mixed heavily with a sparse simplicity unusual in the modern age. Dave went his own way, and the world was better for it.