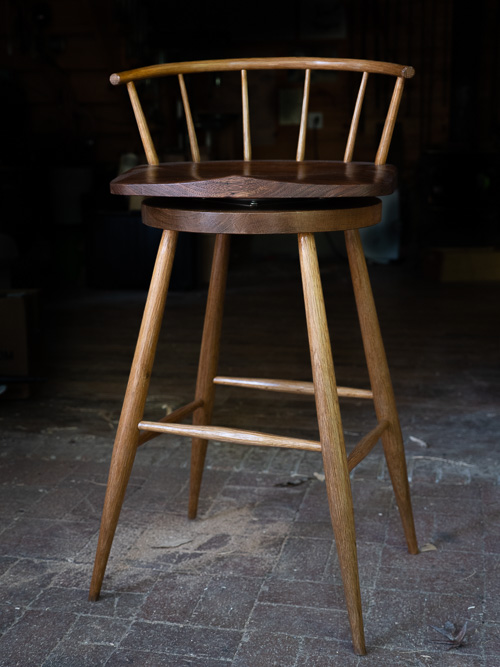 This afternoon Edward picked up a set of four custom walnut and oak swivel bar stools that his wife Phyllis had helped design. Here’s a story about their chairs:

Note: Nobody was hurt in this story. Other than a plastic compost bin.

“I recommend this tree crew to all my clients,” said the homeowner, who was also a realtor by day. “Bob, the father, is teaching the trade to his two sons. The eldest son Joe works for Asplundh during the week, but he still learns from his dad on the weekends. They are the best.”

She introduced us, standing under a nice white oak tree they were getting ready to fell.

“Elia is a chairmaker and can use some of this tree. Could you load it for him?”

Bob-the-dad was curious about my work, immediately pulling out his phone to find my website. We talked about trees and wood for a while – he was excited the wood had found a good home, though it meant less firewood for him to sell.

They tied a rope to the trunk and moved the loader nearby for a push if need be. Bob grabbed a big saw and started the notch that directs the tree as it falls. The saw was dull so it took some time. Bob looked a little flustered. The second cut of the notch overshot the first, plunging deep into the tree. This is not good – the notch needs to be precise in order to do its job well.

Eldest-son-Joe, started calmly making suggestions. “Maybe take a little off the left side, dad.” “That’s great!” “Now clean up the first cut a little….” I started wondering who was learning from whom.

Bob started the back cut that fells the tree. The tree started to lean back, pinching his saw.

“PUSH!”, he yelled. Joe brought the loader up and pushed on the back of the tree a tad bit, freeing the saw.

“Umm, I think we might need to cut a little more”, said Joe.

“Aren’t they amazing?”, the homeowner asked. I hadn’t noticed she was standing behind me, watching the proceedings. “Bob is so skilled – it’s wonderful watching his sons learn from him.”

Later, as I split the log into parts for a set of four bar stools, I realized we are all like that lady. We hire people because they are like us or because they are different from us, because they look successful or need the money, because they tell a good story or because they fit into a story in our heads. It’s often hard to articulate those reasons to our neighbors, or even ourselves, so we just say, “They are the best.” And maybe for us, they are.