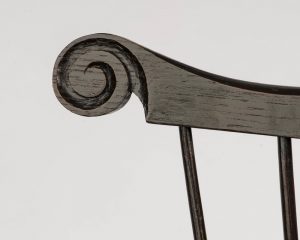 This week I shipped a Fan Back and a Birdcage Side Chair to Rene in California.  Here’s the story that went along with her chairs (I’ll get back to some how-to articles soon):

My Grandmother was a hands-on sort of woman. She was an artist and drew medical drawings professionally before marriage. Being the holiday season, I was thinking about her today while I put the finish on a Fan Back and a Bird Cage chair. I remembered the story I wrote the day she died: 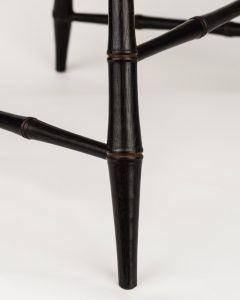 I should pause to tell you that modern boiled linseed oil is not, in fact, boiled. It has all kinds of toxins which cause it to dry, but it is not boiled. Traditional linseed oil was boiled, but in an air-tight container since linseed oil’s boiling point is higher than its flash point.

Grandma does not know this and decides — in typical Grandma fashion — that anyone with a little initiative can boil some oil. She buys the raw stuff, drives home, pours it in a cooking pot and puts it on the stove. And she forgot about it.

When she remembers the oil, she runs into the kitchen and discovers…..everything is fine. So she lifts the lid. The pot explodes. Grandma smells like burnt oil, her walls are black with soot. 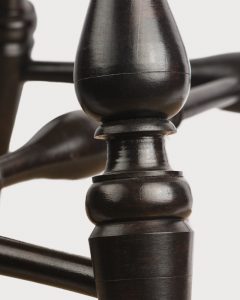 Oh dear lord, how to pay for a new kitchen? The opportunity comes when Grandma learns that Marlon Brando is interested in American Indian rights. Grandma writes his secretary a letter: “would Mr. Brando be interested in my father’s book of Edward Curtis Indian portraits?…” He is indeed. Mr Brando got a book. Grandma got a new kitchen.

About fourteen years after I come along, one of my first serious woodworking projects was to make Grandma two shaker tables for her new apartment in assisted living. I built them, and Grandma offered to finish them. She took up a spray can of varnish, but she couldn’t quite figure out the push button on the top. No problem, a can opener will do the trick….

Grandma died years later during a quiet conversation, at the age of 97.