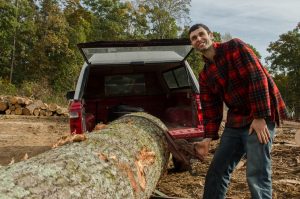 My student Christophe from Australia commissioned three Pete’s Stools with white oak legs and butternut seats.  Here’s the story about his chairs:

I like the log yard when it is quiet, and the three-man crew is waiting for trucks to arrive. At those times, Junior might come down from the knuckleboom truck to talk. He’s a tall man with white bushy hair, blue jeans and a John Deere ball cap. Mostly he talks about wood — how it grows, how it’s cut, and how it’s sold.

When logs arrive at the yard, Junior sorts them by species and grade. Veneer, the highest grade of hardwood, is followed by saw logs and logs for railroad ties. The lowest grade hardwood logs are only good for pulp (paper and particle board) and firewood. Pine has it’s own complex grading system, one I can’t fathom.

Last month I was selecting a veneer-grade white oak log for some bar stools on order. It was a slow day and Junior was helping me pick the log. Over the years he’s learned what logs I like — or maybe he’s taught me what I like. Two logs were still in the running, and I started talking about their bark. Bark says a lot about the wood beneath, if you know how to listen. One log had flaky bark, the other had tight, knobby bark. I said I liked the flaky bark.

“They’re probably about the same,” said Junior. “Maybe that tight-barked oak grew in a stand of gum trees. Trees grow to look like the trees around them, same as people.”

Junior’s knowledge is the sort passed from generation to generation, highly regional and rarely found in books. It’s a gamble to ignore his advice: a brave gamble or a foolish risk. I decided to trust my instincts and bought the flaky-barked oak. It is a beauty.

Here’s some photos of the stools being built: 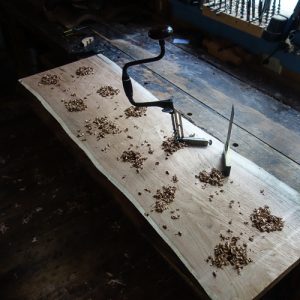 Not boring at all! 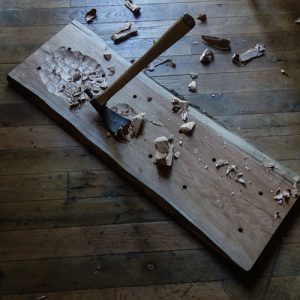 I love using this adz. 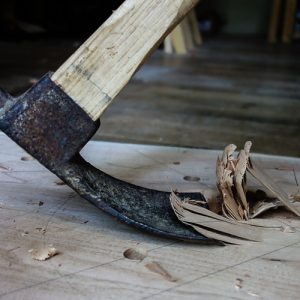 It is doing more splitting than cutting. 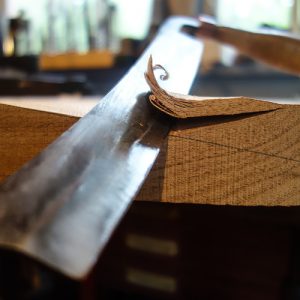 The drawknife splits too. 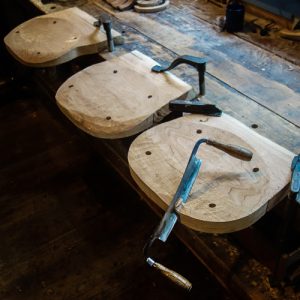 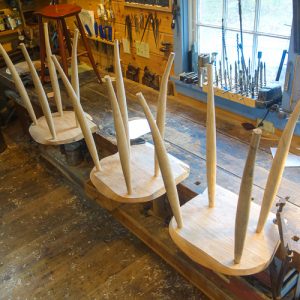 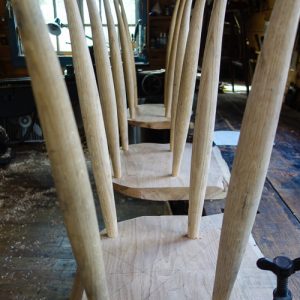 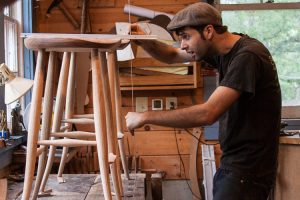 I’ve had photo-journalism student Stella Reneke in the shop the last month,  so I finally made it in front of the camera. 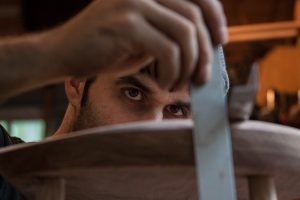 Elia,
I truly enjoy watching your bar stool progress.
Pictures, can indeed, say more than words.
I want to build the long wooden tool rest like you and Curtis have in your shops. I have watched countless you tube videos produced by Curtis trying to catch the specific design, to no avail. Yours seems similar to his. I am in need of some pictures to help me build a tool rest like you guys are using.

Sometime, on your blog, please show different tool rest picture angles front and rear with shots of how the bolting works and how many pieces of wood are used, etc.

Hey Elia,
I always love your attitude and demeanor in your videos, I really like the “tone” and cadence of the writing in this post. I think you should continue to write like this—are you thinking about a book project?
And of course the woodworking gems in the photos are priceless! Thank you for sharing your knowledge with us.
PS-If you don’t already, you should see a chiropractor on a regular basis, woodworking puts us in odd postures for long periods of time.

Thanks for the kind words! I think a book would be fun at some point, but I’m in no rush. I just called my massage therapist today – thanks for your concern. Elia

I really enjoy reading your post. The same is true here in East Texas, find an old logger or sawmill culler and listen to them. They see things from looking at thousands of logs I will never see. This is a critical relationship that takes awhile (at least for me) to develop, especially when you’re only buying one log at a time.