Chair Stories: The Sheriff and the Trailer 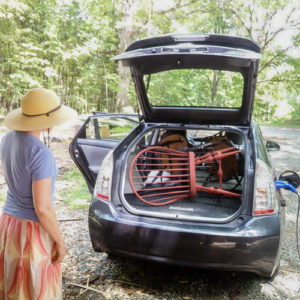 Last week my sweetheart Morgan delivered the last four loop backs in a set of six loop backs and two sack backs.  Who knew four chairs would fit in a Prius! Here’s the story I wrote about the chairs:

I was off recently to buy a white oak log for a set of loop back chairs, but as I hooked up my trailer I noticed it had a flat tire. Darn! As I wrestled to get the rusted lug nuts off, I remembered my first trailer…

I was twenty-two years old, dirt poor and cocksure. The cheapest trailer I could find was a tobacco trailer, which I quickly bought for a hundred dollars.

New tires were soon needed, costing more than the trailer itself. The next week I went to the log yard to get a huge hickory log. I heard some knocking noises as I headed home, but finding nothing wrong I kept driving. Four lug nuts on my trailer continued to slowly loosen.

The deputy sheriff lived a half mile from us. As I rounded the curve in front of his house, the wheel of my trailer came off with a loud crash and went rolling across the sheriff’s yard. The portly sheriff, who had been busy pruning a tree in his front yard, chased after the wheel as it headed towards his pond.

Meanwhile, my trailer had come to a stop half in and half off the road. The trailer was steeply tilted with the hickory log that threatened to break loose at any moment and follow the wheel across the yard.

I got out and the sheriff, having won his race with my wheel, came to look at my trailer. He was puffing proudly and looking quite amused.

“I’ll go call for help,” he said and walked to the house. As I began to gingerly roll the log off the trailer, two deputy sheriff cars pulled up. Two elderly men got out. They stood in the road directing the nonexistent traffic, talking in muffled tones and watching me work. They seemed disappointed when I finally had the road clear.

As they were driving off, one fellow stopped and said, “Always put tobacco on log trailers, never logs on tobacco trailers.”

I bought my current trailer the next week. It was built to haul cars.

What a wonderful punchline at the end! And so typical of a 20 something cocksure young man! Great story Elia. 🙂

Thanks to your story, I now have the Benny Hill chase music stuck in my head.