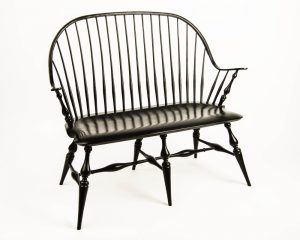 On Friday I delivered a Continuous Arm Settee to Mark and Leslie in Chapel Hill, NC. They have a modern apartment downtown and wanted a more contemporary chair, so I put cigar-turnings on the settee (like those on Curtis Buchanan’s Velda’s Chair). My camera blew up, so I have no photos, but here’s a story about their chair:

This morning I was working on a Continuous Arm Settee, my block plane taking nice long shavings on the pine seat. Block planes don’t get much use in a chair shop, but I enjoy using mine when I get the chance. Nothing rare or special, a model mass-produced by Stanley for most of the 20th century, it is special to me for two reasons. It was one of the first tools given to me and one of the first tools that I ever properly learned to tune up.

I was 16, a volunteer at Drew Langsner’s Country Workshops school, helping to frame an addition on the shop. Dan Mayer was there, a professional chairmaker who had recently decided to get a day job. One day he brought me a box of tools and said, “I’m giving away spare tools, pick one out.” There were fancy squares and expensive combination planes, but they seemed too much for a kid to ask for. I picked up a little block plane.

“Sure! Just remember me when you use it.”

The next year, I was apprenticing with Curtis Buchanan in his Tennessee shop. I brought my block plane along, and Curtis showed me how to sharpen the blade. Then he showed me how to flatten the bottom of the plane using sandpaper on a piece of plate glass. Easy enough, I thought.

Finally Curtis gave it a pass. I set the blade and took a shaving — it cut perfectly. I still remember the satisfaction of that shaving. The plane still cuts well, and will for the rest of my life. And every once in a while I think of Dan Mayer, and I thank him.