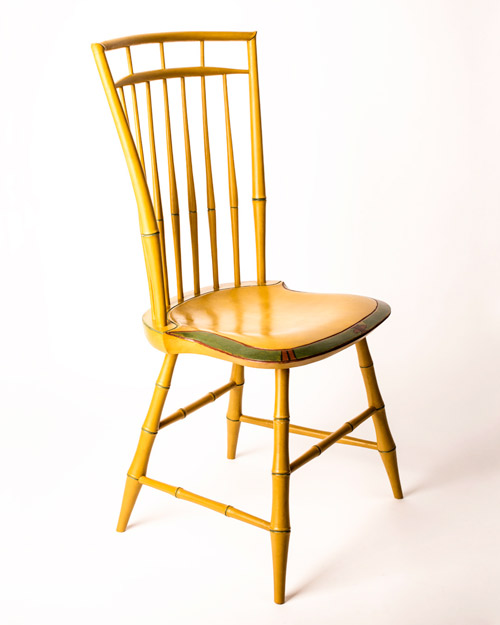 Last week I delivered a set of two Birdcage Side Chairs and two Birdcage Arm Chairs to Cara in Chapel Hill, NC. Here’s a story about her chairs:

I wiped a spot of spilled hide glue off the workbench as I glued up the last in a set of four birdcage chairs. Reveling in the deep patina of my bench’s oak top, I remembered when I had made it. A simple calculation suddenly flashed into my head. My bench, I discovered, is nearly half my age.

I was sixteen when I built that bench. My neighbor was a cattle farmer with a sawmill. I bought his 4×6 oak beams, destined for tobacco barn sill plates, for the top, and oak 4x4s for the undercarriage. All told, the wood cost me about $70. Even then I thought that was cheap. On the shop floor, I hand planed the top on my hands and knees. Knowing nothing about sharpening, I used the plane iron as it came out of the box, never resharpening it the entire bench-building process. I might as well have used my teeth.

It is a solid bench with a unique topography. I have learned to live with its quirks, even to view them with fondness. I never put a finish on the top, but over the years spilled linseed oil has formed a thick black coating. Antique benches have that same coating. Through neglect and abuse, my bench has attained a stature far beyond its years. It looks like an antique.

This year, like last year, I forgot to collect e-mails from many folks who filled out my class survey.  Next year will be different, I promise.  In the meantime,  here’s the dates for the 2016 four-person classes in my shop:

E-mail me if you wish to register.  A $100 deposit holds your spot.

More on the Hungarian Greenwood Chests

Peter Follansbee (Mr. 17th-Century-Joinery)  posted about the Hungarian video the same day I did and of course he knows more about chests than I do.  His post includes a video of a modern Hungarian maker of the chests (there’s several posts about him on Follansbee’s blog).