Sunday in Portland, biking back from the farmer’s market with a backpack full of berries, I stumbled upon an Estate Sale.  A turn-of-the-century house in a nice neighborhood, full of nice things.  Dozens of copper pots, hundreds of beautiful drawings,  closets of wool and mink coats. Books in Hungarian on every shelf.  In one of the closets I found a pair of clogs. 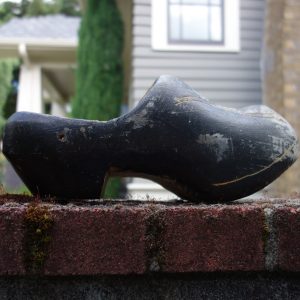 Let’s look at this 1923 Swedish film to see a clogger in action (a spoon carver and a chairmaker follow): 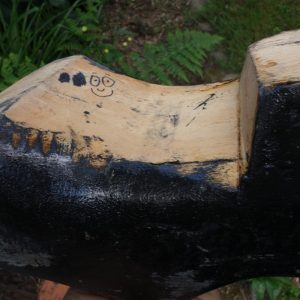 These horizontal lines are from the endgrain crumbling in front of an edge tool. I’d guess this cut was done with a block knife.  I can’t imagine any other tool that would the control and power to make a widecut across endgrain like this, but that’s just a guess: 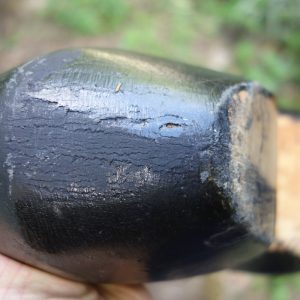 Both shoes have this little hole.  A way to keep the shoe on the foot? 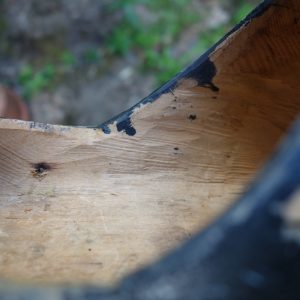 Student’s of mine will recognize this as a classic ‘v-cut’  – two intersecting cuts that are not parallel with the long wood fibers and thus don’t allow an edge-tool to make a clean transition between the cuts.  This carver did as good a job as anyone could: 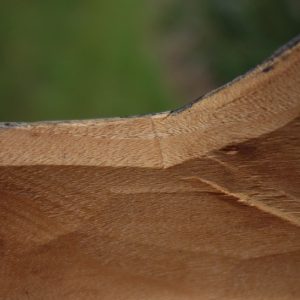 A few quick cuts through the paint add a lot: 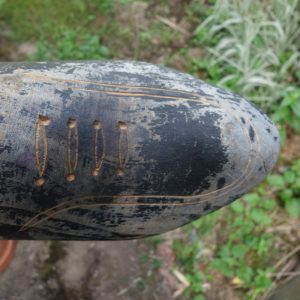 These surface scratches remind me of nothing so much as a belt sander, but maybe I’m cynical: 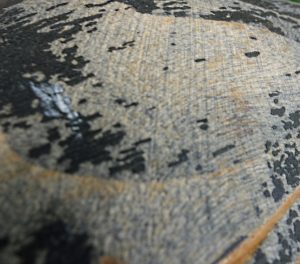 Having flapped my hands in wrist-exercising motions for several months to no avail, I went to my doctor to compliant again about my aching elbows (see March post).    This time he proscribed Castor Oil and heat.  To my disgust he was starting to sound a lot like my mother.

It doesn’t cost much, so I tried it.  I soaked a old t-shirt in castor oil, clothes-pinned it around my elbow, pointed a heat lamp at it and read my book. After 10 minutes I went to work.  No pain.

I have done this treatment most mornings for a week and this has been the first entirely pain-free week I’ve had in a year or so.  Let’s hope my luck holds.