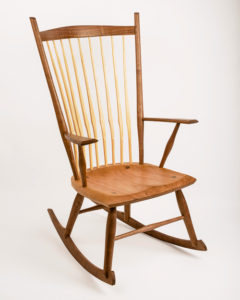 Last Friday I delivered a Velda’s Rocking Chair to Patricia.  It’s the first time I’d left the house in two weeks and it seemed like quite the adventure, even though it was no more than twenty minutes away.  I started building the chair at Curtis Buchanan’s in February, where I spent a week building chairs and proofing his new Velda’s chair plans.  We called it my bachelor’s party (Morgan and I are marrying in a couple weeks, just the two of us).

Here’s the story I wrote for Patricia:

Using an inshave to hollow a butternut seat for Patricia’s chair, I suddenly remembered how I got my first inshave:

Crouched on the ground in front of my shop, I was tending a fire that I had been stoking for two hours. Occasionally I would peer into the fire, make a disgusted face and keep stoking. A casual observer might have thought I was just some 17-year-old kid playing with fire. But serious business was afoot: I was hardening my first inshave.

I had recently started describing myself as a chairmaker, but without an inshave I was a mere impostor. What to do? Commercial inshaves cost a good $70, a minor fortune to me.

Our taxidermist friend, Aaron Honeycutt, had a welder’s torch. I had an old drawknife, and Aaron kindly bent it into an inshave for me. But cutting tools need to be hard, which involves heating the whole thing till it’s cherry red, then dropping it in a bucket of water.

So that spring morning found me on my hands and knees stoking a fire. The fire wasn’t really big enough. One part of the blade would get hot, then the other, but never the whole thing at once. I’d huff and puff and get smoke in my face and cuss and puff some more.

I still don’t know how I did it. I was puffing away, then I looked into the fire and saw the whole inshave was a beautiful cherry red. I lunged for my tongs and in one glorious hissing, steaming, eruption, I dumped it into my bucket of water, then jumped up and yelled in sheer joy.

I used that inshave for over a decade. It had one tiny soft spot where the blade hadn’t gotten hot enough, but I came to view it as an old friend. Students would ask, “Where did you get this inshave?” “Oh, I made it,” I’d reply casually, as if it really was nothing at all. 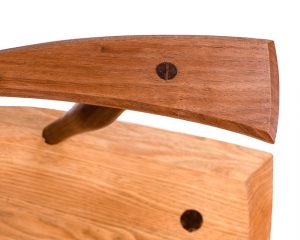