Growing a Loop Back Arm Chair

As most of you know, I’m at Curtis Buchanan’s designing a Loop Back Arm chair. 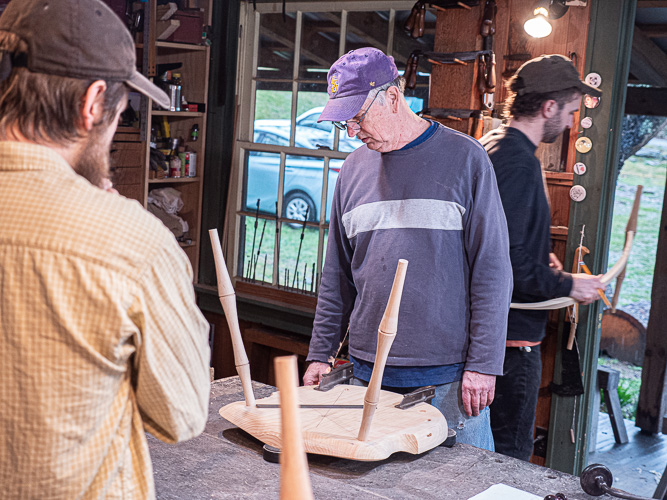 On the second day we had a visitor from NC, Reid Gamble who has been apprenticing with laddarback chairmaker Lyle Wheeler. 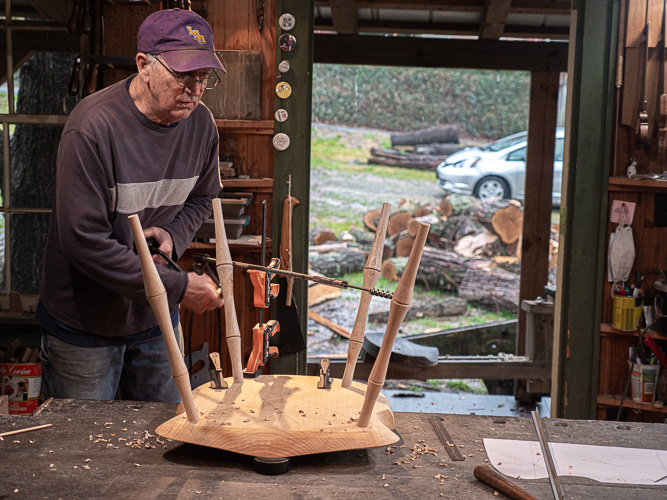 First we bored for the bent stretcher. 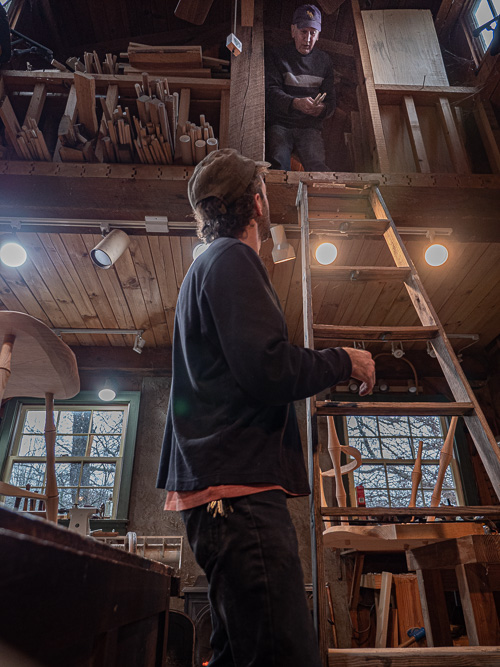 Curtis had to climb upstairs to find dry wood for the two short turned stretchers…. 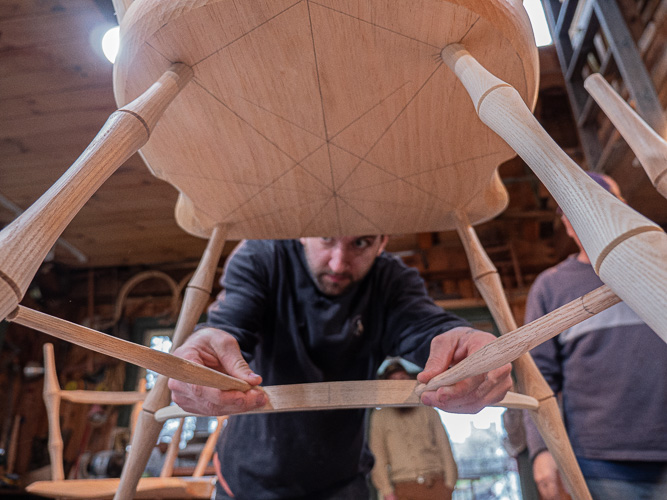 ….. which Eric cut to length so we could figure out where they would look best entering the curved stretcher.

We bored the holes in the curved stretcher and then we assembled the undercarriage. 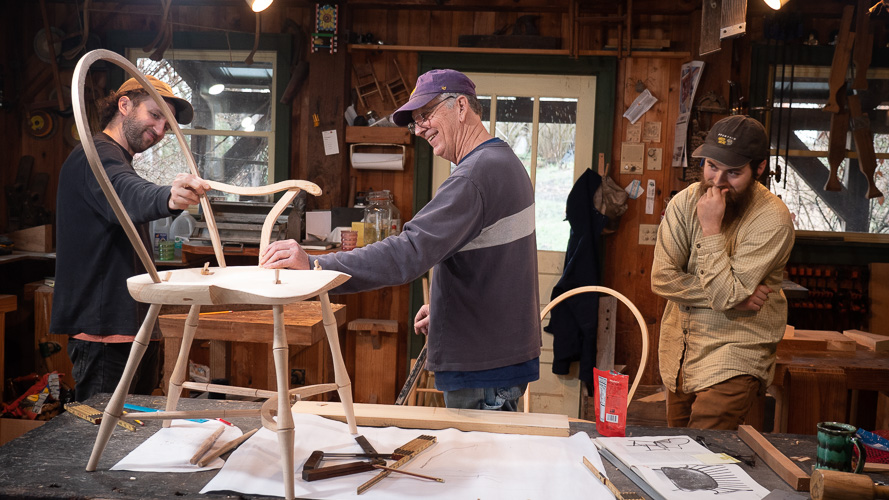 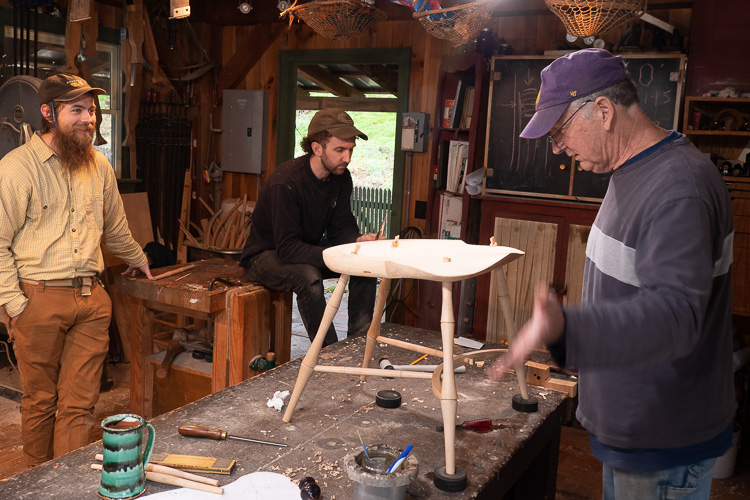 The we stared playing with arm designs from sawn pine scraps (the arms will eventually be bent oak). 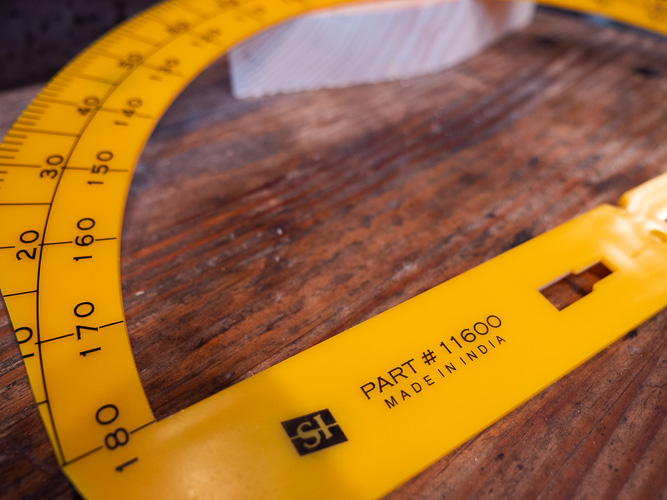 I got several e-mails wondering where to get the big yellow protractors seen in my previous post. They are called chalk board protractors and the above photo holds all the info we know about them; they were given to Curtis by a student a number of years ago. I avoid needing one by setting a big t-bevel to the angle and then finding the angle on a normal protractor or Bevel Boss. 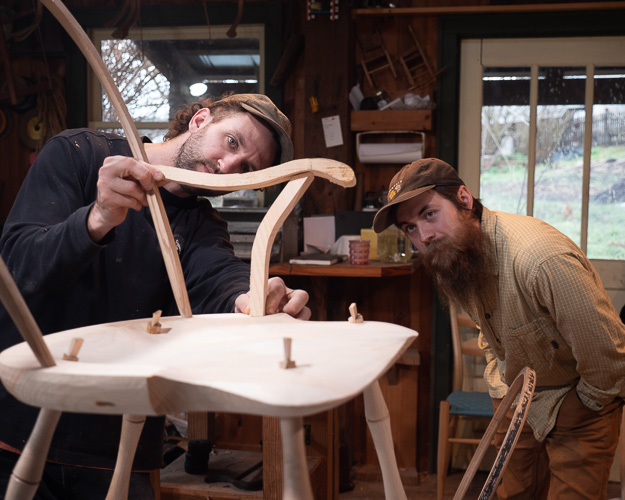 Don’t mean to “bogart” the kind offer to comment, but Im bursting with an idea I learned from Mr. Buchanan.
Why not SPLIT the back at the level of the proposed arm, letting it become the arm, swooping it over to a widened tip for the palm? The leftover from the split would continue down into the seat!
I never thought about a bow back chair turning into an armed chair!
I love how you guys let the juices flow!
Curtis Buchanan has been one of my hero’s for about 6 or 7 years!

That is a interesting idea! I’ll have to mention it to Curtis. Thanks, Elia

I like the idea of a loop back chair! No joints in the back, except where the spindles pierce it! I might play with the heft of it tho; seems the loop will be handled quite roughly at times. Ive pictured a flat cross section( where the top of the loop runs parrallel with the floor. I when entertaining guests, I find myself standing behind a chair, examining and feeling the back, its contours, as we have the pleasant”back-n-forth”. The flat(3/4×11/4″) is just right not to worry about flexing if I squeeze.
Im sort of blown away that you have allowed anyone to express their feelings & thoughts here! THANKS.!
Oh, and thanks for insights on lathes; I do appreciate the older models. I “cut my teeth” on a old lathe at Y&J Furniture Co. on Geer St in Durham& figured out how to copy by “look&measure”, after my move from Augusta, Maine in 1986.

Looking good! As one still trying to learn how to make a chair from plans, it’s fun to get a glimpse into the design process.

Lost Art Press has a large protractor which is similar.