My girlfriend and I went up to Brandywine, PA over July 4th to visit friends. One day we walked to a 19th C. three story milk barn that had been converted to an enormous used book store. I spent more time looking at chairs than I did books – they had over a dozen early 19th. C. Windsors. Always something to learn.

Going through my photos today, I found a few interesting ones: 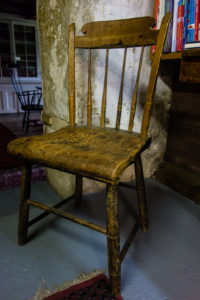 This chair was in one corner. Not much to look at…. 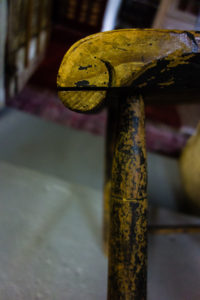 They glued a strip on the front to make the seat look thicker,. This was fairly common about the turn of the century (1810 or so). 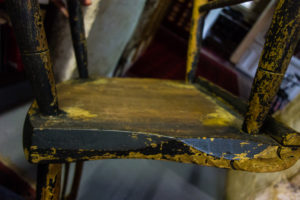 Flip the chair over and you can see the neat bevels they put on the underside of the seat. 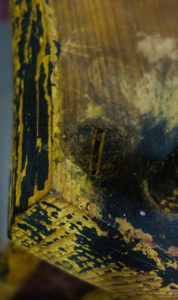 Look! He put the post wedge in the wrong way! One more wack with the hammer and he’d have split the seat. What was he thinking? 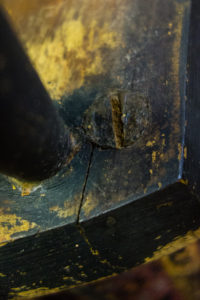 The other post was done the same way, but this time he did crack the seat. I’m pretty sure the wedges are original; the crest sets the rotational orientation of the posts, there is no evidence of any other wedges in the posts and the posts look original. They must have had some new guy in the shop gluing up chairs that day. 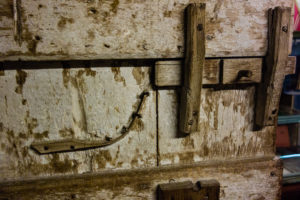 As I was leaving, this latch caught my eye. The spring is just a whittled piece of green wood. The spring’s end is broken off where it would have butted against the end of the bolt. Too simple! 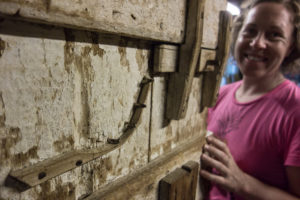 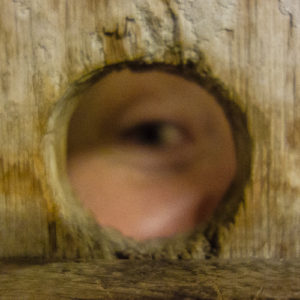