Hewing a behemoth bowl/Comb Back class

My greenwood week students are making small bowls this week and I promised them I would post this video of a German dude making a small bowl. I just watched it again for fun:

Beer and schnaps for lunch, anyone?

Peter Follansbee told me not to store my axe in the hewing block, I think.  Why? I don’t remember. This dude isn’t listening to Peter.  Pay attention mister! (12:15)

He’s got some rather impressive axe control. He doesn’t use much else. 15:20

Do any of you spit in your hands?  I find the idea slightly disgusting, but I think I’ll have to try it.  18:55

At 19:30 he uses the hand adz with a pulling/swinging motion I’ve never seen.

About 10 years ago my clogging team went to a folk festival in Brazil to preform in a  little town first settled by Germans in the 1840.  Apearently the population boomed again in the 1940’s as Nazis fled WWII.  Most people still spoke German as well as Portuguese and ate German food.  We were put up in a school with the German marching band from Germany and we listened to them play for hours on end, whether we wanted to or not.  The end of the film brought back memories of parties with lots of cheap beer and Caipirinhas, old German dudes flirting with my young clogging friends and lots of dancing.

There seems to be plenty of interest in a Comb back class so I’ve booked one in March.  More info on my teaching page.  Also, the settee class just had a cancellation, so there is a spot available again. 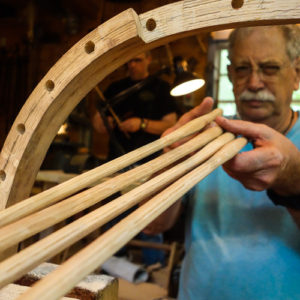 I have watched a few from this series. The title translates as “The last of their trade?”. When a watched it again I noticed a few more things:
– the portion that is split out is used to make a smaller bowls. I think he says up to four.
– this method of making these large bowls/ tubs is unique to this guy’s region. They were sold well beyond the region.
– business was good until the 60s when plastic tubs became more readily available.
– there is a part in the last third where the guy gets a little amused and agitated when he talks about the troubles with using tubs made from boards, as was done in the south of Germany. I think this part is after he had the beer.
– he is 84 years old.

Cool! I always wised I could understand what he was saying.

What a wonderful video Elia, I was fascinated how he separated the meat of the bowl from the shell of the bowl, using wood wedges. What a great tradition.