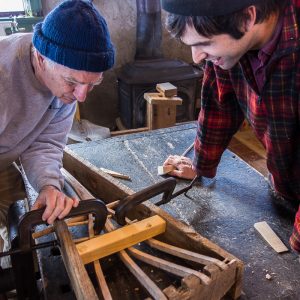 I first met Curtis Buchanan 15 years ago this month. My father drove the five hours to Jonesborough, TN and dropped me, a 17-year-old homesick boy, off for a week.

Curtis had a student that week. I split logs and listened in on the class. I couldn’t imagine I would ever build a Windsor chair – they seemed so complicated.  Curtis was the most welcoming woodworker I had ever met. I don’t think I realized it then, but Curtis was living my dream.  “Maybe I can come back one day,”  I said as I was leaving.  “You’ll be back,”  he replied.

Curtis taught me what I know about chairmaking.  He also became a model for my life.  I wanted to emulate his laid-back nature, his sociability, the conscious way he paced his life, his generosity.  I think I even acquired some of his accent.  Curtis is still one of the most remarkable men I have ever met.

After my last post about bodgers, I got this interesting e-mail from English chairmaker Rob Duckmanton:

“I was talking to Robin Wood about the whole bodgers and high wycombe thing. There certainly were chair makers in high wycombe, but they were just a fraction of the UK’s chair making workers. There’s been lots of debate about the term “bodgers” and Robin Wood, after much research, can find no historical reference to the term. We think it was a phrase coined by modern woodworkers in the last half a century.”